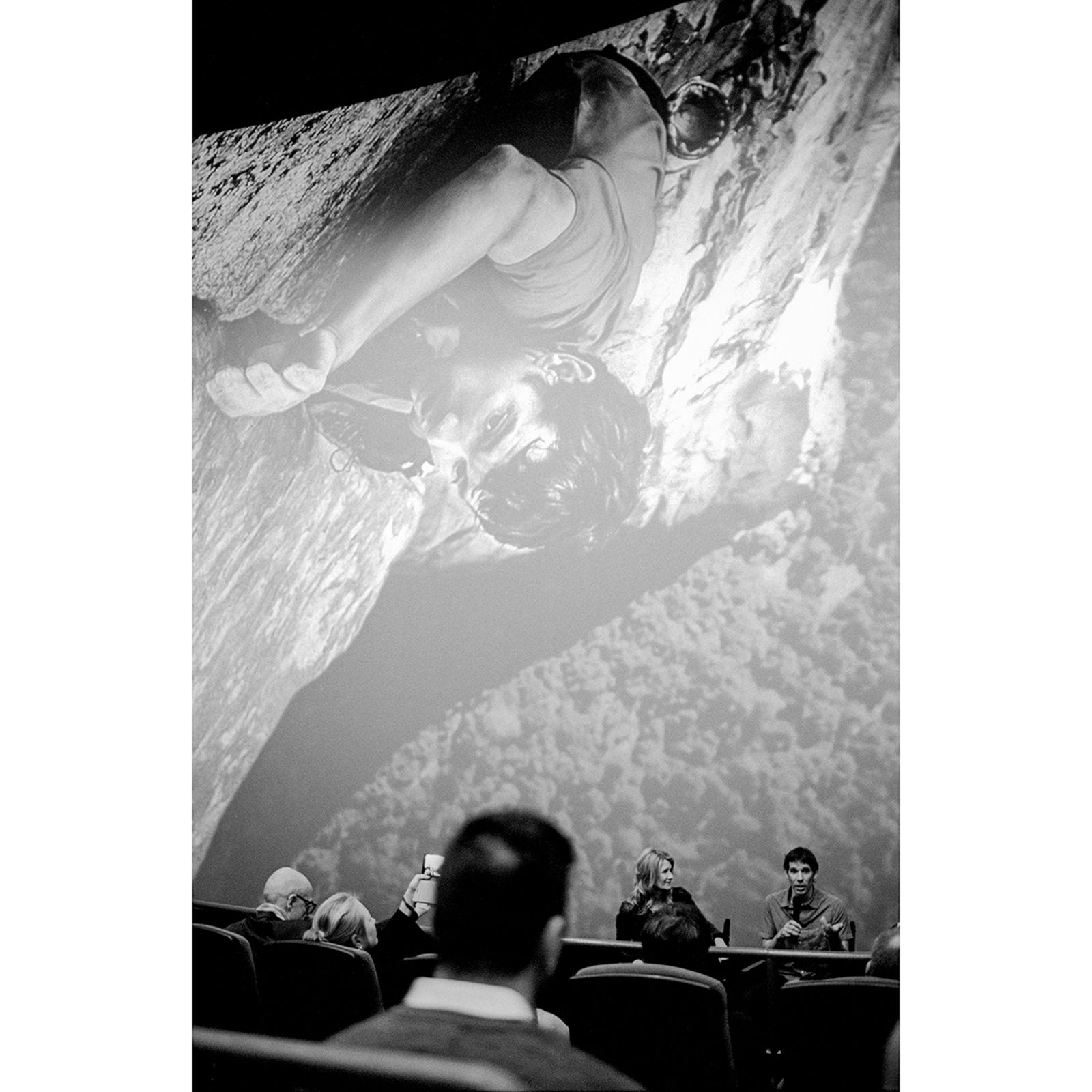 Alex Honnold is sitting inside an Imax theater in Los Angeles, giving answers to the apparent questions after screening the documentary Free Solo.

Subconsciously, I took that photo of him, when I saw two versions of Alex Honnold in front of me. The person, who made a very approachable impression on me and the hero or symbol swanning above him, that seems to be standing for more than a rock climber that conquered El Capitan. Beside a really gripping movie, something else stuck with me. Honnold got praise for being an example for a whole generation to look up to.

Reflecting on him as being seen as a hero, I realized there was an underlying message of Free Solo, that might have evolved unwittingly. In pop culture aphorisms like "Fake it 'till you make it" have become a status quo. It seems like in many ways it is setting the tone of a whole generation, the new tenor of the American Dream. It is a concept that has become the main fuel beind social media and (self) marketing. A lifestyle that is so integrated, the president of the united states is a prime example. When everyone adopts this in their path to alleged success, it will slowly replace sustainable values and achievements, creating a culture that is phony and hollow inside.

Now there is Alex Honnold. He is not a pop star, actor, rapper or politician. Yet he is an idol to many, a somewhat niché superstar, standing for achievements that can't be faked. We see him on that wall and we know, we feel, it's real. There is no green screen, no make up and no special effects. No second takes, no dramatic lighting, no acting or directing in a classic sense. In some scenes it's a tripod with a camera attached that waits for his appearance in the frame, recording the most dangerous shots. It becomes apparent that this is not made for the camera, not made for our entertainment. His performance and the movie thereof, become an antidote to a virus that creeps inside us all. That question that hovers above everything: How can we achieve something noteworthy, without blowing it out of proportion or how to become recognized for our work, without fabricating an unrealistic image.

Being the first and only person to free solo El Capitan is already so outstanding and extraordinary in itself, it doesn't need to be exaggerated from a story telling perspective. Alex' personality is so unusually unagitated, it acts as a counterweight to the four hour long, life-endangering stunt he is pulling off. All in front of a camera team that can only watch, yet never direct or interfere as his life is depending on making no mistake. He was the first person in history to pull it off, yet there was no signs that he felt the need to show it off. He involuntary starts to impersonate the opposite of an ever growing narcissist culture that will do everything for attention, even when nothing substantial has been achieved.

It needs an intimate and gripping documentary that wins an Oscar to show something that Alex Honnold might have done anyway, only without us watching. For himself it would have been the same achievement. For us the added value of this movie is not the proof that he has done it, it's showing what a hero can look like in our current world. It's not just the achievement in itself, much more the way it is being presented and dealt with, that makes it truly honorable.

It is clear that Alex Honnold and the creators of the movie never intended to show us the failures of our culture, but it is an underlying message. It is the timing of the production and publication that makes it become more than just a documentary that won an Oscar. Alex Honnold inescapably showed that truly valuable achievements we look up to, should never be fabricated. The truth is, a lot of what is sold and presented to us as sucess these days, is not authentic. The Oscar went to a team for the effort to visually presenting this personal milestone to us, yet the actual Oscar should be earned for the hidden power this movie has, resetting the values we look up to, from fake back to to real.